I've been caressing the idea to buy a Wi-Fi enabled media player in order to tap into the gigabytes of (legal) music that sits in my NAS. I've considered investing into a Logitech Squeezebox, or a similar product, but I wasn't sure such a device would be able to play directly from an NFS share, without any music server running somewhere.

Just when I started to consider building a player out of a SheevaPlug, I remembered of the ultimate source of cheap hardware, ready to be repurposed: eBay. $125 and a few days later I had a like-new black Asus Eee PC 2G Surf waiting to be turned into a music player. 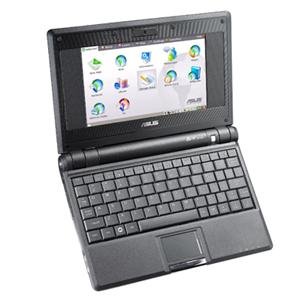 The unit came with Ubuntu Eee Hardy Heron on it and only 50MB of free space left on its 2GB solid state drive. After a merciless review of all the installed applications, I ended up with 200 MB of free space, ready to host a music player.

Finding the right music player was no small feat.

I really enjoy Audacious on my work laptop because it's plain simple and is able to play music directly from an NFS mount without any glitch. But it lacks an integrated library manager, which is a must for any software powering a machine dedicated to playing music.

So I went on trying all the players with integrated music library manager I could find in the Heron standard software repository (I won't quote names because most of these applications have now better versions available). All of them were suffering from multiple woes rooted in their bad handling of network fluctuations. The most common issue was a too short not-configurable music buffer, leading to broken music replay. The worst issue was with a library manager that was not only taking ages to scan my 16+GB of music but also, on the first network glitch, would start to delete songs, one by one, from the partial library it had created (talk about defensive programming gone bad).

So I ended up installing Amarok. The reason why I didn't immediately install it, knowing it has been my favorite player for all the time I was on Kubuntu (until the KDE 4 debacle), is its sheer size. It's a 120 MB install and on an almost full drive it didn't feel like a good idea to try it first.

This turned out to be the perfect match! Not only Amarok plays music from my NFS mount without a glitch, but its music library is totally unaffected by disturbance in the Wi-Fi signal.

All in all, my Eee Music Player is doing great. It only takes a few seconds to be resurrected after being suspended and music starts playing soon after.

Do you think repurposing full fledged computers into single application hosts is a crazy idea? Is it something you've considered or done already?
Posted by Unknown at 11:51 a.m.