To me, legacy code is simply code without tests.

I've gotten some grief for this definition.

After purging one of our project from code that we consider legacy (deprecated, EJB2...), we noticed this interesting trend in our Sonar dashboard: 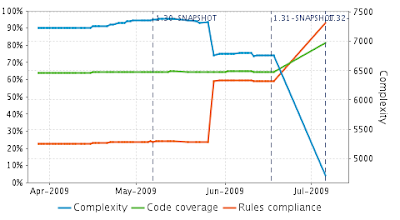 Notice how code coverage is way less affected than complexity and rules compliance. Our legacy code had test coverage, not the greatest ever, but it had some.

Therefore, I am wondering if we could then postulate that legacy code is code that has fallen short of software development standards?

Have you noticed similar trends?
Posted by Unknown at 12:09 p.m.