Mule and the Home Service Bus

While following the discussions on Oasis Blue's SmartGrid Interest List, I noticed that smart device makers quickly reacted to the draft charter for the proposed OASIS Energy Market Information Exchange (eMIX) Technical Committee by stating that their capacity to implement full-fledged SOAP clients was limited. Looking at the bare-metal specifications of protocols like Zigbee, it is easy to understand that SOAP would be another board game.

Of course, when I heard about this need for protocol adaptation, my favorite quadruped quickly came to mind (I know, when you have a hammer...). So I came up speculating about this: 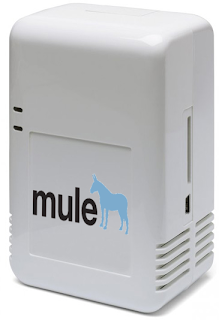 Yes, that is Mule ESB running on a Sheeva Plug. In fact, I should say Mule HSB, as in this case the platform would serve as a Home Service Bus.

What could be the role of such an HSB?

Protocol adaptation comes first to mind. Allowing all your home devices to interact together internally but also with the outside world with "higher order protocols", like SOAP or anything more RESTful. What would happen if your smart meter starts talking with your dryer?

Orchestration would be another benefit. Here I am not thinking in term of the classic and already solved home automation problem. Imagine orchestrating your home devices in order to satisfy some predefined power consumption patterns. What would happen if a BPEL engine was running your house?

Home rules application would be the ultimate benefit. By plugging a rules engine to Mule, one could define advanced scenarios when a house would automatically negotiate energy purchases and sales based on inference rules and facts (like: do you have an plug-in hybrid sleeping in your garage). What would happen if your house was smart enough to make money while you sleep?

I agree, this is a lot of speculation. But I reckon that a capable Home Service Bus will one day become a must in our habitations.

PS. Google just told me that Bert Boerland coined the Home Service Bus term. We must be up to something ;-)
Posted by Unknown at 9:48 p.m.