Who owns this application? What can possibly be complicated about such a simple and innocent question?

Unfortunately, the answer to such a question is not that easy. Or at least, we have created software organizations that make it hard to answer.

Though it makes sense to have a division of labor between different teams qualified on certain aspects of software applications, the main problem resides in the partial system views that such a division creates.

Out of developers' hands, an application is oftentimes perceived by QA, DBAs or Operation teams as a giant black box: 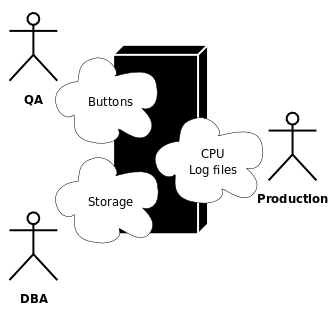 (yes, it is a canonical black monolith of 1-4-9 proportions)
In fact, this giant black box has a few keyholes on it and, through these keyholes, they can barely peer into it. Consequently, the black box effect leads to QA teams seeing applications as sets of buttons to push, DBAs seeing them as data and table spaces and Operation teams dealing only with cryptic log files and alarms of all sorts.

No-one knows what is inside this darn black box. And when somethings goes haywire, only the Magician of Oz is deemed able to do something: 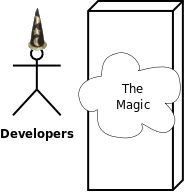 Now that everybody is so agile, this kind of concern may sound irrelevant. After all, developers are now generalizing specialists, so the barrier between them and other teams is now significantly lowered. Or is it?

The reality remains for the most part a difficult hand-off of applications between teams. I have seen different tentatives to improve things (including detailed operational manuals), but at the end of the day most of these attempts amounted to shallow knowledge transfers.

Do you have any success story where applications have been successfully pwned by different teams?
Posted by Unknown at 10:30 p.m.