A Simple Pattern for Prevayler

While implementing Prevayler in a cool project I will detail in a near future, I of course met the need of doing it in a way that will allow me to unit test my prevalent system independently from the persistence mechanism. This would allow me to exercise all the code implied in the business logic of my domain without actually bootstrapping the prevalence engine.

I came to the simple pattern shown below: 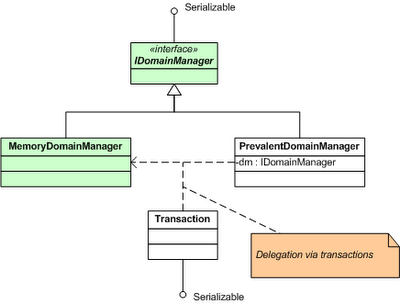 The IDomainManager interface exposes all the domain related methods. The MemoryDomainManager implements this interface and contains all the serializable data: it is the actual root of the prevalent system and the only object to thoroughly unit test.

The PrevalentDomainManager is merely an empty shell that delegates all calls to the MemoryDomainManager, wrapped in Prevayler transactions. It also contains the basic code to bootstrap the persistence engine.

Note that the MemoryDomainManager object does not implement any synchronization mechanism: Prevayler, thanks to its support for transactions, blissfully takes care of this.

Having unified MemoryDomainManager and PrevalentDomainManager behind the IDomainManager interface naturally allows to unit test all the components relying on the domain objects without using actual persistence and to deploy the productive application by designing it to use the prevalent implementation of the said interface.

So, how about dropping your prejudices and jump head first into the jolly world of Prevayler?

________
* For those of you who wonder, Prevayler is a purely object oriented persistence framework that offers a solid alternative to the now classic "RDBMS+O/R mapping framework" pair. It received a well deserved Productivity Award in 2004.